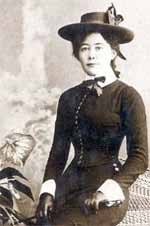 Miles Franklin was born Stella Maria Sarah Miles Franklin in 1879 on the grazing property, Talbingo, of her maternal grandmother near Tumut in New South Wales. She spent the early part of her life at Brindabella, the family home station in the Monaro region of NSW. In 1889 the family moved to a property near Goulburn, NSW, and then in 1903 to Penrith, a suburb on the western outskirts of Sydney and finally in 1914 to Carlton, an inner suburb of Sydney.

After the publication of My Brilliant Career in 1901, Franklin tried a career in nursing, and then as a housemaid in both Sydney and Melbourne. While cultivating her literary contacts with such writers as Joseph Furphy, Norman Lindsay and Henry Lawson, she wrote as a freelance journalist for the Daily Telegraph and The Sydney Morning Herald under the pseudonyms 'An Old Bachelor" and 'Vernacular'. She then became involved in the early Australian feminist movement via her friendship with Rose Scott and Vida Goldstein.

Franklin left Australia in 1906 for the USA and undertook secretarial and editorial work for Alice Henry, another Australian, in the National Women's Trade Union league. She then shifted to England in 1915 and worked for a brief time at Margaret and Rachel McMillan’s Nursery School in Deptford, South East London. The McMillan sisters created a legacy for the importance of early childhood education: their views on the importance of outside play are continued in todays’ Early Years Learning Framework (EYLF) here in Australia. Miles Franklin used her nursing knowledge in the Scottish Women's Hospital at Ostrovo in the Serbian campaigns of 1917-18. She re-visited Australia for a few months in 1923-24 before returning in 1927 until 1931, and then back finally to Sydney in 1932.

Miles Franklin died in 1954. In her will she bequeathed her estate to establish an annual literary award known as The Miles Franklin Award.